General observation of habits shown by 2 tamanduas
First tamandua, named Gabby, was raised from the estimated age of 3 months to the age 1year and 3months.The most important thing about her behavior: we tried to follow her clues and follow her natural insincts as much as possible:
- from 3-6 months old, she was constantly sitting on the back of my neck, holding with her claws by my hair- naturally, tamandua would be spending her time riding on her mother's back. She was sleeping during that time as well, regardless of what i was doing. Tamanduas are able to learn location of their termites nests, like a virtual map, and follow that map. We were able to observe that, after only few times passing the same rout, she started recognizing areas where she found food before, and was climbing off me, eating ants and termites and then climb back on me.

- from 3-4 months old, she was falling asleep only by holding my thumbs and squeezing it very gently,  as she was growing up, that behavior changed, but almost at any age, she was interested in grabbing my hand and doing the same squeezing motion for 20-30 mins at a time. I am convinced that this is something that tamanduas would do between themselves.
- age 6-8 month old, was very difficult stage- she tried to move on the much further distances from me and was very hard to watch without losing track of her. Showed less and less desire to sit on my neck. A number of times managed to climb on the trees that were too big for her and was not able to climb down- we had to climb after her.
- from 3-6 months old, she was learning to identify different species of ants.  As her skin was still very delicate and fur very soft, she had little protection against fire ants, or big black ants. Each time she would make an attempt of eating those ants, and therefore disturbing the nest, ants would attack her and she would immediately climb back on me for protection. I would clean the ants off her, assuming that this would be the help that her mother would provide. As the tamandua was maturing, at first she learned how to avoid those nests, and then when her skin and hair became more tough, she was able to eat those ants and clean herself up by herself.
- Showed interest in leaking behind my ears from early age. Unknown reason.
- from the age of 1 year old, she showed very strong independent behavior and was making numerous attempts to run away during her walks in the orange fields. We walked her 4-6 hours per day, making sure that she is absolutely self- reliable in finding food. It was becoming progressively hard to watch her on the trees, because she was moving very fast from tree to tree.
- Food: she loved watermelon, avocado and milk replacement. Few times when she located olive oil, she was interested in drinking large amounts of it, but we didn't allow her.
- Bathroom: while she was in the inside the house enclosure, she had a habit of pooping outside the enclosure- she used to march next to the running water- bathroom area, and poop in the same spot every day. She peed each time in the same area in the enclosure - hanging vertically on the mesh wall and peeing in that position.
- Tamandua was in heat in very irregular intervals, there was no clear pattern of it. We did a lot of urine testing trying to determine if there was any other condition causing it, but she had no crystals in her urine, and there were no signs of infection or anything else.
- While climbing the trees and foraging for them, she would periodcially go into 2-3 mins trans- her eyes would close and she would remain motionless, while still holding to the branch. Possibility of eating certain ants that would produce some chemical that would cause it.
As a very young animal shewas showing constant need to be on my body( like in nature with her mother), but as she was growing up she showed less and less interest in me, and eventually was only interested in getting out of the enclosure.

Second tamandua, Booboo( Tia):
- Food: loved avocado, no interest in watermelon, loved coconut water straight from the coconut and the coconut milky lining of the young coconuts. Each time she smelled olive oil natural moisturizer with lavender essential oil on my skin, she tried to leak it off.
- Bathroom: she picked exactly the same spot for pooping- near running water on the edge of the bathtub, peeing was inside the enclosure- always sitting on the ground. pooped every 3rd day. Peed every day. 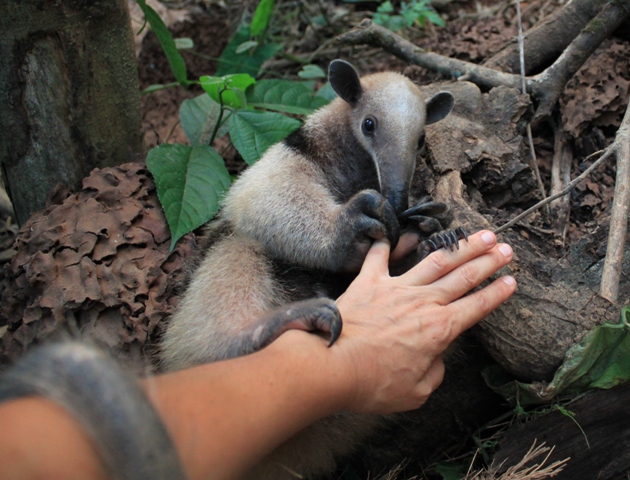 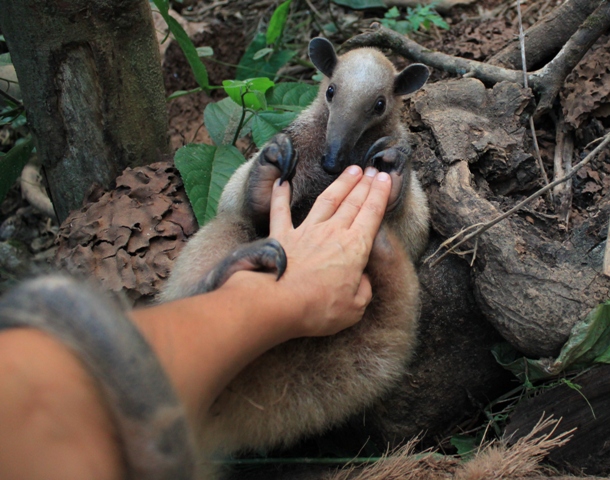 - Each time when i cleaned her enclosure she tried to get my hand engaged in a very similar squeezing game as the first tamandua.
- Was in heat only once during the 3 months with us.
- Had no interest in sitting on my shoulder or neck, unless she was massaged. When i massaged the back of her neck she was going in certain trance- her whole body was very relaxed and she was keeping her eyes closed. Due to her injuries i was doing massage to her back leg, and to the area with the hair loss- to increase the blood circulation, so i had to find a way of her not getting stressed out and sitting still: 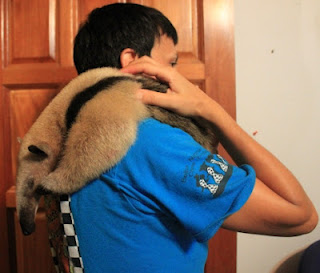 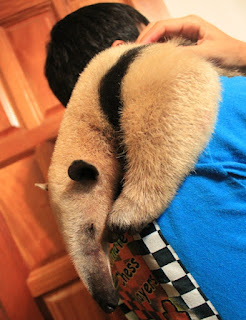 Both were interested in eating larva of the wasp nests, but didn't not eat honey: 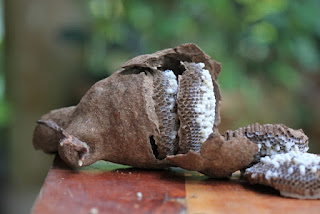 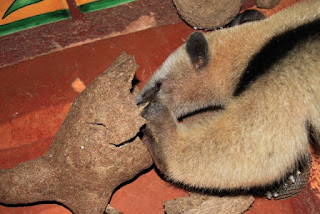 TERMITES
Both tamanduas were very particular about the type of termites that they would eat. They would not touch certain types even when they were very hungry.
Termites that she didn't eat: very hard inside and porous like this one: termites looked brown and very small, skinny 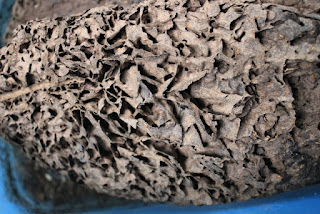 Her favorite ones were flying termites as well as creamy whites, and light brown: 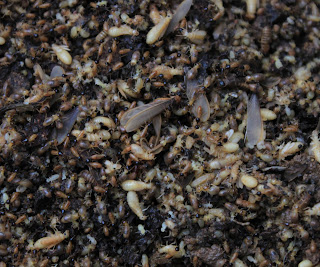 It came from this type of nest- very small pores and soft inside: 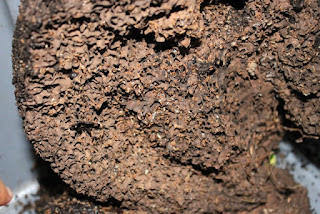 Another example of preferred nest- small, young, with darker brown surface, some of it was almost black: 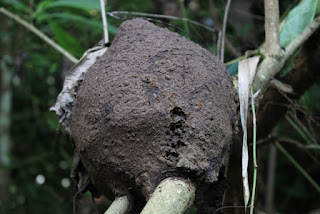 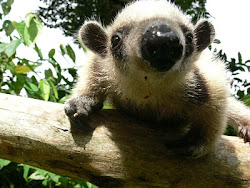 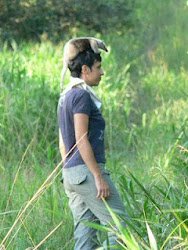 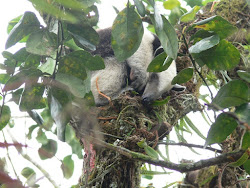 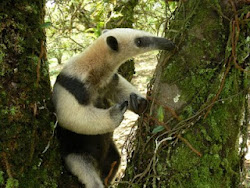 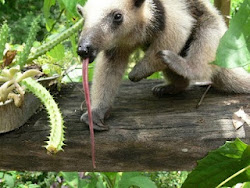 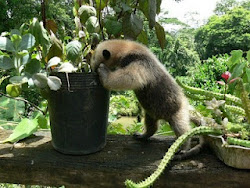 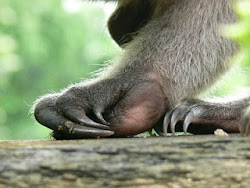 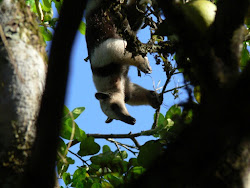 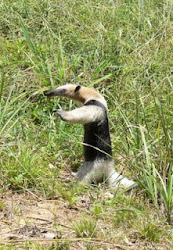 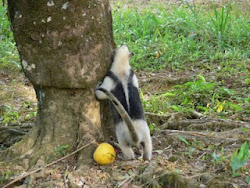 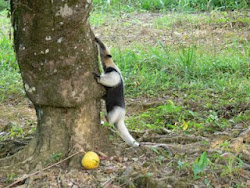 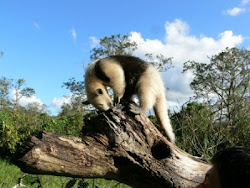 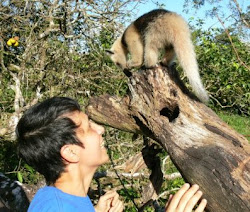